The sight of them leads to two very different reactions; one is of utter relief / joy. And the other? An intense fear / anger. I speak, of course, of the equally loved and hated Toyota HiAce minibus taxi.

As a driver of a private vehicle, the sight of a HiAce is bound to push one’s blood pressure up a few notches, this of course being the fault of the drivers who pilot them – along with their beloved, passionate “gaaitjies”. However, as a commuter who makes use of public transport, these vans are mostly a necessity on long, tiring trips to and from work.

So, why is it that an estimated 8 out of 10 minibus taxis on our roads are one of these Toyotas? Because, over the years, several competent rivals such as the Mazda Marathon and Nissan E20 have existed solely in the shadows of the HiAce. Where did the success of this blocky van all start?

Well, the very first and original HiAce van was launched in South Africa way back in 1969. 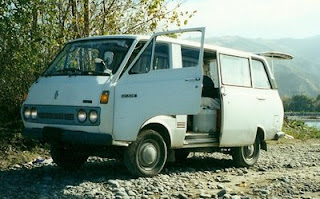 It was not a pretty sight and one could never have imagined it would spawn a legendary series of now ubiquitous vans. All this time later, a few of these original models can still be spotted on our roads and that in itself is a telling fact.

The second incarnation of the HiAce was launched by Toyota in 1977 and featured a more streamlined (for the time!) look with single headlights. 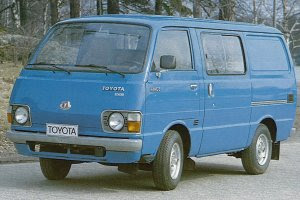 This model really kicked off in SA and built the incredibly solid reputation for reliability upon which the HiAce van’s success is based.

Then, in 1983 – around about the same time that Golf 1 was rocking the sales charts – the third generation HiAce was launched in the country. It was bigger, of course, and featured the old-style Toyota “T” which served as the brand’s badge.

This is the model that proceeded to flood our roads in absolute droves.

Generation 2 of the HiAce (above)

The combination of simple, incredibly enduring mechanicals, good value for money and the cachet of the Toyota name proved a recipe for crushing success.

With any Toyota, one can safely assume that the mechanicals will outlast the body and the HiAce was no exception.

Many can be seen quite literally falling apart around (a surplus) of occupants bundled inside as the gearbox and engine plough on with vigour and va va vroom – sorry, wrong Japanese brand there.

Then we have the wheels - the hubcaps fitted to many HiAce’s when the original items have given up the ghost range from those of other Toyota’s like Corollas and Cressidas, to more bizarre substitutions. I’ve seen many a HiAce fitted with BMW rims. A few are even kitted out with so-called “spinners”.

But even these can’t overshadow the sight of a fully branded taxi. What better way to get your brand name out there than when it is brandished across the most recognisable icon on our streets?

Many of the brands are popular, with VodaCom and MTN vans making frequent trips to the tune of a less than melodic mobrikaap cacophony.

Some taxi drivers are not quite so picky and really couldn’t care less what anyone else thought of them; these poor souls drive around in PEP-clad HiAces. Sorry – the taxi fare of these yellow and sky blue embarrassments are apparently not on a concurring “lowest prices for everyone” basis…

Inside, the no nonsense HiAce interior provides nasty vinyl-covered seating for as many occupants and reusable Shoprite packets as humanely possible – and that, ladies and gentlemen, is about it in there.

There is also the quaint, old-school dashboard-mounted gear selector which gives away the archaic origins of the van.

This 2007 Siyaya looks virtually indistinguishable from the 1983 version (above)

And what HiAce would be complete without – at the very least – a 3000 watt mega sound system with 3000 speakers that make a mockery of the 2.2-litre engine’s modest power output.

As sun visors labour under the weight of 20 or 30 “latest mix”, illegally copied CDs (labelled untidily, if at all, in a permanent black “koki”), so the commuters enter a mobile Galaxy on a Thursday night, whether they’re dressed for the occasion or not.

Custom, GLX Executive, Super 16 or Siyaya. Names have come and gone, but every HiAce has been driven into the ground, lasting many years before a replacement is required.

A laughable “emergency exit” window at the back, an indicator stalk that would be more useful as a door handle and at least seventeen scrapes and dents sum up what is actually an amazing vehicle, purpose-built and fulfilling that purpose better than many new cars. 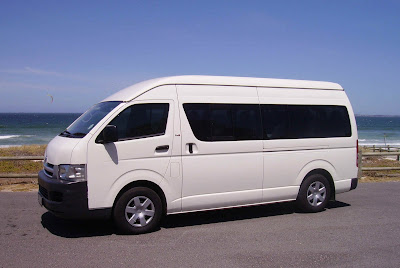 Airbags, ABS and extra space - the Quantum was a logical and long overdue progression

While it has been around three short years since the bigger, better and crucially safer Quantam superseded it, new cars will probably be flying on fresh air by the time the last HiAce ceases to function.

The ever-evolving motoring industry always leaves room for some heated banter. Get involved here where the most amusing, controversial and attention-grabbing aspects of modern motoring are discussed.

Karl Ryan
Cape Town, Western Cape, South Africa
I'm 23-years old and am a producer for a youth's daily TV show - a job that has me doing everything from finding the clip where Beyonce fell on her face and talking about it to conceptualising an interview for the spokesperson for the 2010 world cup. I laugh at everything I possibly can and I am crazy about all things motoring.